In honour of Pregnancy & Infant Loss Awareness month, we are honoured to share Laney's story with you. Laney is a wife, preemie parent, and loss survivor. She is mom to Brynn (7), Josephine (4), and Walter (1), and her two Heaven Babies Riley & Spencer.

This is her story. 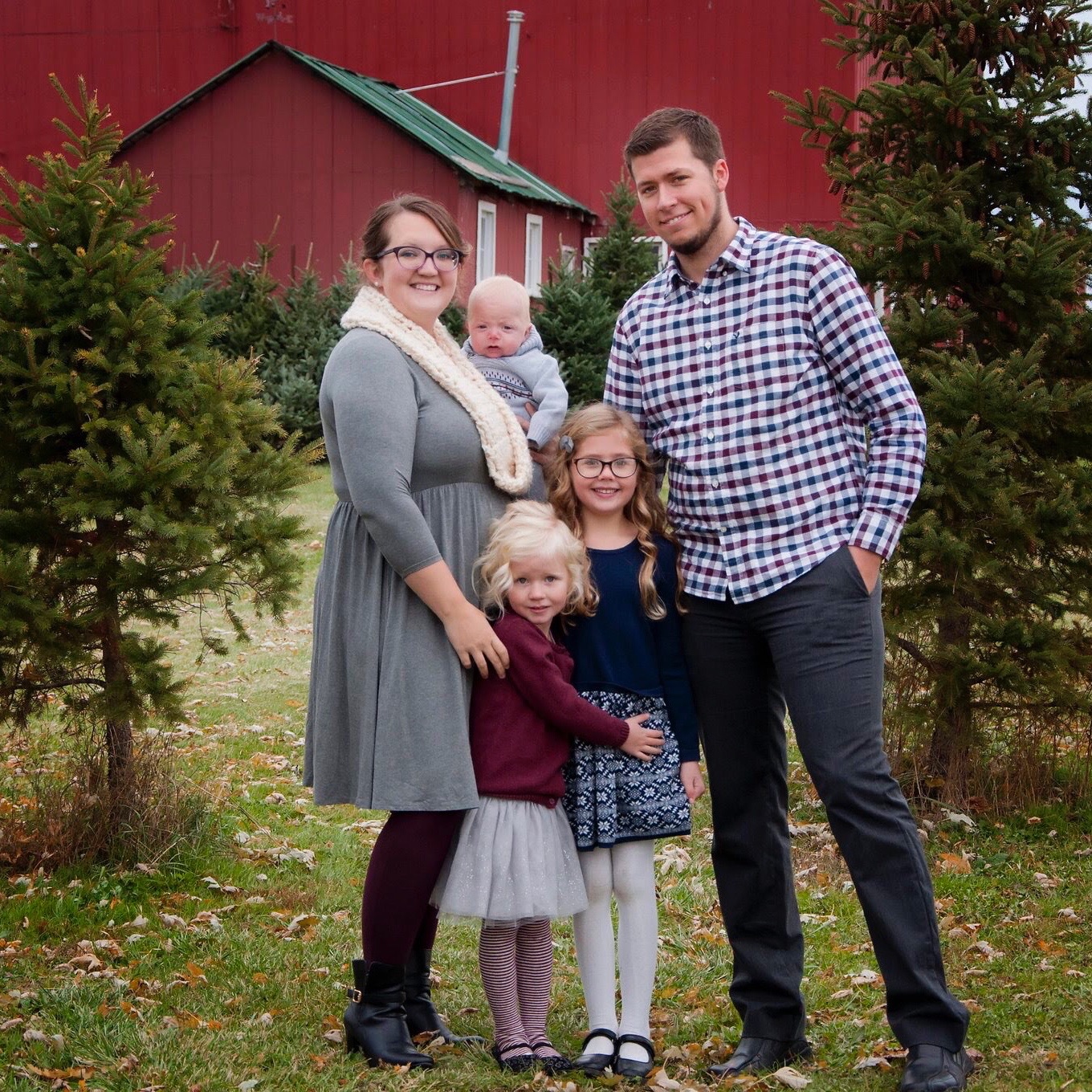 I wish I had a simple story of loss like some other people. Does that make me sound like a horrible person, it probably does. I should explain myself more.

I wish I had a story similar to others so that I felt I could connect more about my loss. I didn’t have a “miscarriage”, I didn’t have a stillborn baby, I suffered a loss as rare and unique as the condition that created my story in the first place. That makes it a hard story to tell, I find myself saying I had a miscarriage just to help myself feel better and to explain it easier to others, but I wish there was a better word in the English language for it.

I had hopes, dreams, and carried life, until it was lost, and I had grief, pain, and suffering instead.

In May of 2016 I lost my twins at around 14 weeks. My story of loss starts about 6 weeks before that, at my dating ultrasound.

I had two beautiful girls at home, and my husband and I knew our family wasn’t complete yet, so we were thrilled when we discovered that we are expecting again! My first two pregnancies were typical, both were C-Section deliveries, but nothing really made them difficult. At my dating ultrasound I discovered that we were going to be doubling the amount of kids we have, because, whoa, I’m carrying twins! We told everyone, we were so trilled and shocked and amazed and ready for this adventure. We celebrated these two new little lives with so much joy.

Three days later I get a call from my family doctor, asking if I am being followed by anyone, and if I have any questions. Nope, none here, I’m just so excited to be having twins! Looking back, I now see why she called. The next day I get a call from my midwife, she sounded a little off, I assumed this was because I would have to transfer care due to carrying twins. I’m standing in the Ikea parking lot, when I hear the words:

Something is wrong with one of the babies, none of us in the clinic have ever seen anything like this before.

We’ve sent a referral to see a specialist, I don’t know what this all means, but in situations like this with one baby, it typically means termination, I am so sorry. I knew her heart was breaking for us.

The scientific name for what I had was a heterotropic twin caesarean scar pregnancy, which essentially means that Twin A had implanted into my scar tissue from my previous deliveries. Twin B had implanted elsewhere and was doing okay. We were told by the office when I called that because I was still so early in my pregnancy, there was a chance that Twin A could still move, so we would wait and see and have an ultrasound in a few weeks.

We hoped for the best as we went into the hospital, my ultrasound took three hours, it was very quiet. There was an OB reading reports that day who came in to talk to us. He looked sad, I remember that, he looked sad and confused. He said most of the other specialists were away at a conference, but he had called the Chief of Obstetrics and he was going to meet with us as soon as he got back. He told us that it really didn’t look good.

The hardest part was the waiting, and the hoping.

Knowing I was carrying and sustaining life to these two babies, who I didn’t know if I would ever meet. Hoping that things would change; that maybe this all was a mistake and that my babies were going to be just fine.

A week later we sat in an office in the hospital as we were told how bad it actually was. How no one in the hospital had ever seen a case like this, there were no records of this anywhere in the province, or the country. No one knew exactly what they were supposed to do with my case. If I was pregnant with only one baby who had implanted there, they would recommend immediate termination as my life was at risk. But with another healthy baby there, we had to make a decision.

I knew I had to do whatever I could for my child, I would do anything short of dying, which they reminded me numerous times was NOT an option as I had two other kids at home who needed their mom. I decided that we would terminate Twin A, in the hopes of saving myself and Twin B. I named them that day, my sweet Riley Corwin and Spencer Cerys, names for either boys or girls, middle names meaning friend of the heart for Riley, Twin A, and love for Spencer, Twin B.

My procedure was scheduled, for a little over a week away. Once again I was left carrying my twins, knowing I had made a choice to end the life of one of them. We knew that Riley was not growing at the same rate, there wasn’t enough blood traveling to the placenta. That decision still haunts me though, even though I know it was the right one, Riley and I had a lot of talks about it. About sacrifice and love, and what that really means. I came to terms with what it meant, but I still cry about it regularly, always playing the “what if” game.

The night before I went in for surgery, I put my girls to bed, they knew that one of the babies wasn’t growing in the right spot, and I told them that tonight they could say goodbye to Riley. They lay on my tummy and sang songs, they whispered their “I love you’s”, and they said tear-filled goodbyes. It hurt and was hard to experience with them, but I knew they were a part of this too, they needed to get the chance to say goodbye. To let Riley know that even though we never met, the love we felt was so strong.

As I was still pregnant with Spencer, I could not go under general anesthetic during the termination without putting that pregnancy at risk too. So I was awake, as they went in vaginally, as they put a needle into the heart of my baby to stop it from beating, as they watched on a monitor to make sure everything was okay. As they tried this new procedure that they had never done before, all hoping that it would work. I was in pain from every part of it, I was in pain from my breaking heart, but I knew it had to continue so we could try to save Spencer. They asked repeatedly if I wanted to stop, I knew I couldn’t. I had to try everything. I couldn’t give up, I was in this no matter what.

That night I was placed in a semi-private hospital room with a mom who had just given birth. Her baby was in the NICU, so thankfully there wasn’t a baby in the room.

Instead it was a parade of people coming in to celebrate with flowers, and balloons, and laughter. It felt so cruel.

I still don’t know what they were thinking, putting me in there. But I do know that I had an amazing nurse who stayed with me, and rubbed my back and held me while I silently sobbed.

The next day I had an ultrasound, Riley’s heart had not yet stopped, it should stop soon, they said. I had to come back to the hospital in a week to check and see how things were progressing.

Now I was waiting again, waiting for my baby to die, waiting to find out if my, our, sacrifice was worth it.

A week later we found out that both twins hearts had stopped due to the procedure. We lost both babies, even though I did everything I could, even though I went through hell, I still lost both of my precious babies.

I will never forget the sound that came out of me when our doctor told us. It wasn’t a scream or a cry or a sob, it was animalistic.

It was raw, heart-wrenching, grief.

We had to spring right into action after we found out; bloodwork, two doses of methotrexate to stop the pregnancies, booking a D&C.

The D&C showed just how complicated the pregnancy was, how involved and risky the whole thing was to my life. How serious the situation was.

I was released from the hospital on Mother’s Day 2016.

Like I said, it’s not a simple story of loss.

But it is my story of love, of sorrow, of sacrifice, of endless hope.

It’s my story of faith. Of discovering that God isn’t manipulative, He doesn’t make people beg for miracles and then refuse them. I remember saying to my husband that if God fixes this, I don’t think I could believe he was a loving God anymore. Why would He choose to heal our baby, and not someone else’s. Why would He save our kids, and not the ones killed by mass murderers. Because He isn’t a God who picks and chooses who he takes care of based on how many prayers you pray or how strong your faith is.

He’s a God who sits in the mud of life with you and wishes he could take it all away, who loves you through your darkest and hardest times. He’s a God who loves, and who journeys with us through the darkest of valleys.

He doesn’t take it all away, life happens, and He is with us through it all. That’s what my faith is anyway, that’s what I choose to believe.

It’s a story of amazing and loving medical professionals who did EVERYTHING they could, who held me, who cried with me, who helped me survive, figuratively and literally. It’s amazing doctors who admitted they were flawed and did not have all the answers, but they were willing to give their all to help us out. It’s nurses who understood, who cared, who loved, and who snuck me treats. It’s how they all gave me back hope. Hope that one day, we would be able to try to have another baby. 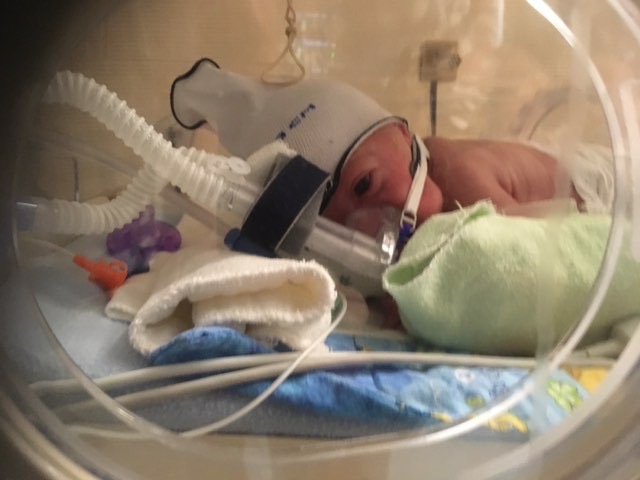 In June 2017, our rainbow came hard and fast and strong. He’s a fierce one, and I believe it’s because he has the love of three babies in his one little heart.